Before we get in to our latest update, here are some more pics from our time in Cappadocia. 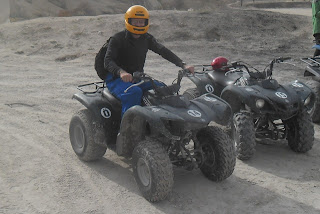 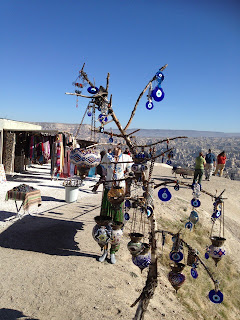 Norm’s birthday was a great occasion and a good excuse for an almost-final get together and party before we all dispersed in Istanbul. Pre-dinner cheese and wine, with some reminiscing about the past few weeks was followed by a Cappadocian feast of mezze, salad, clay-pot dishes and rice-pudding for dessert, as well as a birthday cake. Lots of food, lots of fun, despite having to get up for an early start the next day. 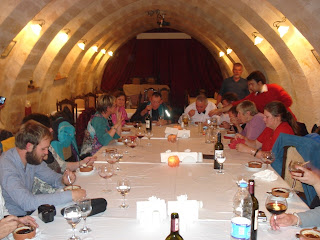 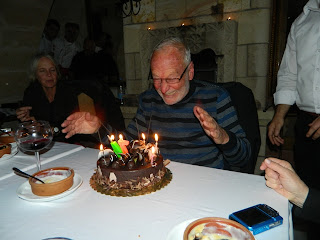 And so the time came as we approached Istanbul to cross the Bosphorous and officially leave Asia, entering Europe. 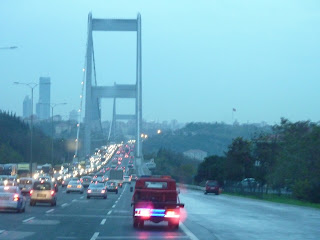 Istanbul is buzzing. Supposedly low season, the Sultanhamet area where we are staying is full of tourists and locals alike. Traffic here is pretty hectic, but there is a very efficient tram-way as well as metro-bus. Sweet shops, restaurants, hotels, souvenir shops, cafes round every corner, along with the Blue Mosque, Aya Sofia, Basilica Cisterns, Topkapi Palace, Grand Bazaar, Spice Market, hammams  – enough to do and see to fill a few days easily. And unfortunately prices are more European than Asian!

Our final official day in Istanbul was pretty wet but didn’t stop people from seeing the sights and ducking into coffee shops, or bars, whenever necessary to escape the downpours. Andrew P even found himself listening to a sermon in the mosque, with a free cup of tea, a good way to sit down somewhere dry and chill for half an hour!

And so on the 1st of December we toasted our journey from Kathmandu to Istanbul. Approximately 13,594 km over land, and some over sea too. 10 countries. 12 weeks. So many new sights, new faces,  experiences had, food tasted, different lives witnessed, things learnt.
Another Odyssey experienced.

Odyssey (n)        ‘a long wandering or voyage, usually marked by many changes of fortune;
‘an intellectual or spiritual wandering or quest’  (Merriam Webster Dictionary)
Happy travels.
Posted by Odyssey Overland at 05:19 No comments:

Email ThisBlogThis!Share to TwitterShare to FacebookShare to Pinterest
Labels: Turkey

It seems like our Georgian final feast was just a couple of nights ago, and yet we are already almost onto a final Turkish delight.

I think the pictures will do most of the talking about our night out in Batumi, Georgia, but we’ll share a few details.

It was decided that the evening would be a formal affair – well, as formal as you can get on an overland truck, but you’d be surprised! Toby and Paul S wanted an excuse to wear their kilts again, and I think quite a few of us enjoyed the opportunity to dress up and go outfit hunting in some of the Georgian second hand shops. You’ll be amazed what we found.

Our night was spent at a restaurant inside a (‘grounded’) ship, and we had a variety of Georgian dishes and jugs of wine throughout the night, along with live music and lots of dancing. It was a great night out and a great farewell to Georgia.

And that concluded our time in Georgia and led us on to Turkey. The final group border crossing of the trip wasn’t as long as some, but on the Turkish side very illogical, having to go ahead to certain places to pay for visas and then return to the immigration desk, along with all the other bus loads pushing to be let through. My (Al’s) South African passport also seemed to cause the officials some confusion as to the visa requirements, and while I waited to be issued with my special visa stamp (visa is FOC for South Africans but requires a different stamp) I was witness to the police dealing with a few misbehaving characters. Definitely shows you a different side of the law.

Into Turkey, gaining 2hrs which makes the sun rise early and set at about 4:30pm, we had lunch in Trabzon and then headed up to Sumela Monastery in the mist. An amazing sight, even in the mist – a monastery carved high up into a cliff face. There are still some remains of the frescoes (along with some graffiti too). A good half-hour plus to hike to, but definitely another monastery worth seeing!
From there it was on to our final bushcamp en route to Cappadocia. A couple of incredible passes to get there, complete with snow. Our fire-masters made a fantastic fire, and we had a South African meal called babotie: a fruity mildly curried mince dish of Cape Malay origin. Unfortunately the bar ran out of beer early on but other hidden supplies of ‘bottle number 10’ from our Uzbekistan wine-tasting session, and the dreaded Georgian chacha were found. 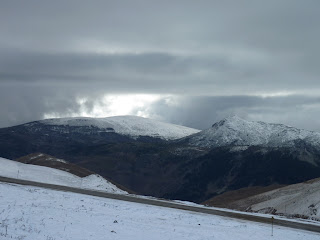 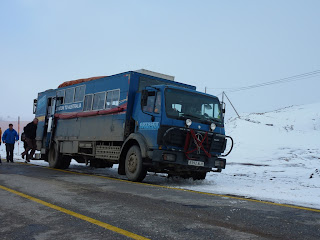 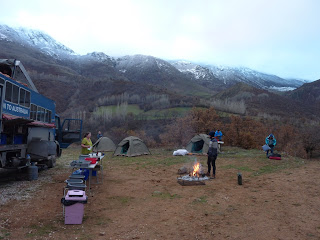 We have been based in Urgup for 3 nights exploring a little of Cappadocia. Yesterday morning saw 11 of us up before dawn for a much-anticipated hot-air balloon flight. The sky was clear, the moon was almost full, frost on the ground as we sipped tea and watched the balloons being inflated. And then it was our turn to fly. Magnificent. There must have been about 50 balloons flying that day (seriously, I counted) which is apparently quite a small number for this site. It was like a balloon festival, lovely to have other balloons in the air too as it made for great pics and a surreal atmosphere, floating above it all. Definitely a highlight and definitely to be recommended. Geologically the landscape is fascinating and our pilot was very good about flying us high and low, in between all the ’fairy chimneys’. 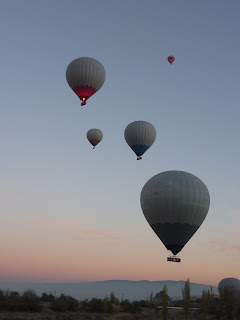 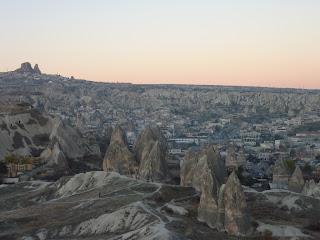 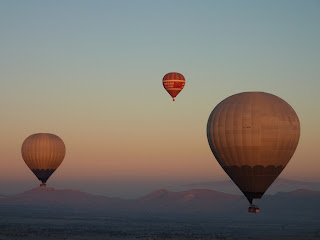 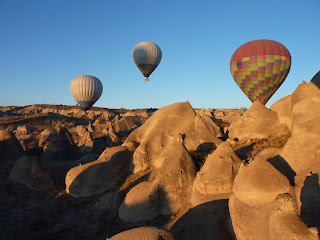 After that we spent the day touring and exploring the area – the underground city carved into the earth, the fairy chimneys, a pottery workshop, and an awesome buffet lunch.

Today is Norm’s birthday, and a final Cappadocian feast before we hit Istanbul tomorrow. Kathmandu to Cappadocia complete, one more stop remains. And that will take us to the end of our rather epic journey. From Istanbul we will be saying good-byes and heading off on our own – some travelling a bit more, some going back to work. But there’ll be one more blog, so check-in with us again to hear about our last couple of days.
Posted by Odyssey Overland at 06:20 No comments:

Caves and culture in Armenia & Georgia

We last left the story of our journey from Kathmandu to Istanbul in Yerevan, Armenia. It was here that some of us had a great night out, starting with a feast of Armenian dishes washed down with Armenian wine, and then heading to a local bar for drinks, dancing and socialising with the locals.

Armenia is a new location to Odyssey this year and hasn’t disappointed, providing stunning scenery, good night life and culture to boot. 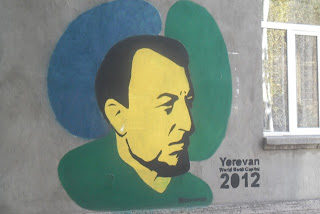 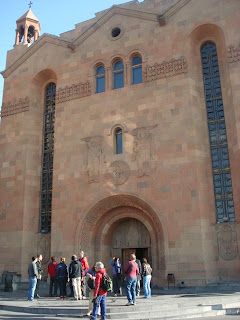 We left Yerevan to head back to Georgia through the Kasagh Gorge, stumbling upon a livestock market en route to Haghpat monastery. The monastery is a Unesco world heritage site and is steeped in history and its evolution is visible in its architecture. We found a nearby farmer’s field to camp in for the night, with a great view of the valley below, and a good spot for Norm to declare that ‘he felt fine, but his legs unstable’.. (After a little to drink). 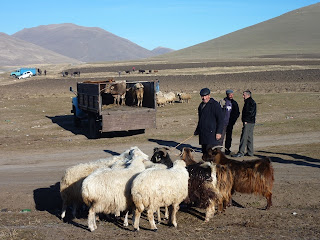 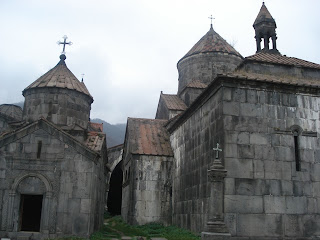 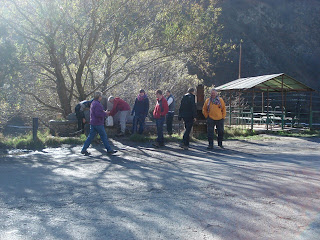 In Georgia once more, after a speedy border crossing, quickest yet at 45 minutes and also the smartest, with clean toilets and a cafe serving tea and coffee!

We spent 2 nights in Tbilisi, where most of the group went on an insightful walking tour with Zaza where we saw the new and old parts of the city.  It was a day of culture and history as we went around the art gallery and Georgian National museum where there was an interesting exhibit on the history of Georgia’s Soviet occupation. Here also Toby, Paul S, Jill and Fraser went to town (well actually to a steak house) with outfits picked up and improvised from some of the local charity shops.
Then it was on to Gori which is home to the Stalin museum as it is the place of his birth. The tour guide Comrade Svetlana had an interesting take on his history with much of the dictator’s actions being overlooked, and many details of his younger years. 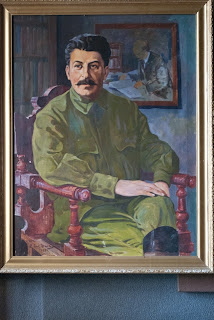 From here we headed to Uplisticke, which is an ancient ‘cave city’,  dating back to 2000 BC. The best way to describe the site is a little piece of Petra. The whole site is hewn from natural sandstone, and of its remains we saw what would have been a pharmacy, bread making areas, prisons, and a more recently-built church. Also various different Halls. 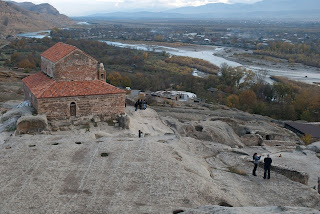 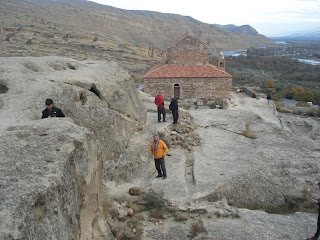 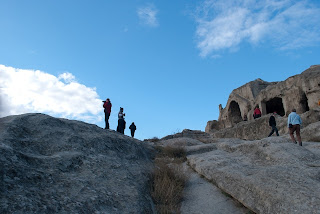 That evening we camped in the shadows of this amazing ancient site in a meadow by the river, not far from an abandoned settlement which was only left in the mid 60’s due to a massive flood.

We had another great Georgian home-stay experience in Kutaisi, Georgia’s second city. This was more like a guesthouse than a home-stay – but no complaints there! Wining and dining with Georgian home-cooking, and Georgian wine that comes cheap by the litre. After we’d had our fill, the evening continued with Toby starting the entertainment off by reciting a poem he’d written about our trip and the expedition members. You may be able to check it out on facebook. That was followed by more poetry, singing and dancing, as well as some acrobatics: a new way of using a broom – illustrated by Al and attempted by others, notably Andrew E. (He did get a sneak preview and attempt at the bushcamp the previous night.)
The next site of interest was another first for Odyssey. The Prometheus caves were only recently discovered, in 1983, and only opened to the public in May this year. The cave system open to visitors is 1.4 km long and the total underground system covers a distance in the region of 21km. The sightseeing path in the caves has been very well done with subtle lighting making the most of the impressive stalacmites, -tites and curtains. As one group member put it “it’s like a fairy land”. Coupled with the optional boat ride out at the end (yes, there is an underground lake) made for a very memorable experience. 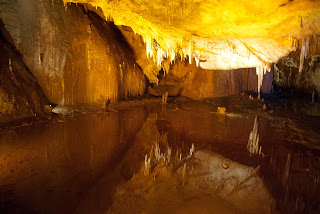 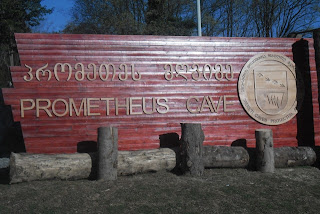 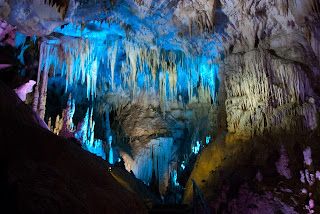 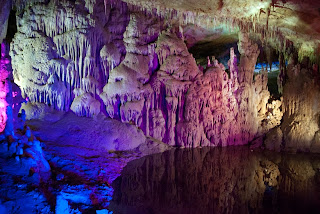 Just around the corner was  another site with more caves and Georgia’s very own dinosaur footprints.
From here just a couple of hours drive put us camped on the shores of the Black Sea which enticed a few for a quick dip as the sun set over the hills a magical experience and not as cold as you may think once over the initial shock upon entering!


And that is just about as far as we have got –  in anticipation of our final Georgian feast in Batumi tonight (details to follow in the next instalment). 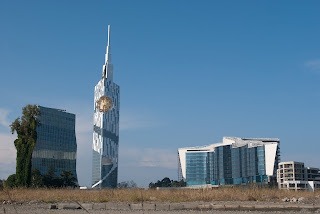 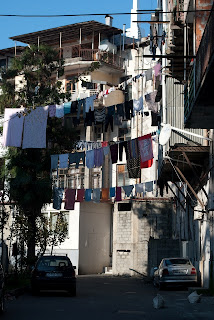